A billion years from now, when humans have mastered superluminal and interdimensional travel, hope was that a new age of enlightenment and peace would be achieved as a consequence of applying scientific rationality. This was not to be. A proliferation of new esoteric philosophies created competing models for how the 200 billion inhabitants of Earth should live out their dire existence. The misery of the people is often a catylst for the rise of a despotic leader. Sardar Khan elevated himself, by guile and murder, to become leader of Empire Earth. Now in his 300th year, and kept alive by machines, he continues to rule with an iron fist. From the ancient texts of Niccolo Machiavelli the ruling elite recognised the need for a scapegoat, a common enemy to blame for the hardships suffered by the common citizen. Sardar set his sights on the extermination of “The Elite” a genetically superior leadership class created through the application of extreme eugenic engineering. Not only did this group represent the greatest challenge to his position, but their affluence and power was already a source of resentment amongst the general population.

A genocidal war was waged culminating in “The Great Exodus” which saw a million of the “Elite” escaping Earth to consolidate their power in neighbouring Galaxies. Here they applied their superior intellect to waging a never ending war against Empire Earth with the aim of overthrowing Sardar.

At the outset Sardar expected a quick and decisive victory against the rebels. That was not to be. Worse still the advent of superluminal and interdimensional travel introduce many new foes from distant worlds, all competing against each other for scarce resources and living space. Welcome to a universe at war.

These are elite troopers of the far future, cruel and cold hearted. They are the instruments of Sardar Khan’s oppressive regime. Their appearance is designed to intimidate and frighten. They are mobile, aggressive and highly skilled killing machines.

They represent Empire Earth and are in the service of despotic dictator Sardar Khan. They fight against innumerable foes from innumerable galaxies. Not least against the rebel Elite (Homo Dominus) expelled from Earth by Sardar Khan.

The Intergalactic Marines of the Light Brigade are fast and agile. Their body armour offers good protection, but is lightweight, and does not inhibit their mobility. Their role is fast deployment to hold strategic points awaiting the arrival of the more strongly armoured and equipped Heavy Brigade. 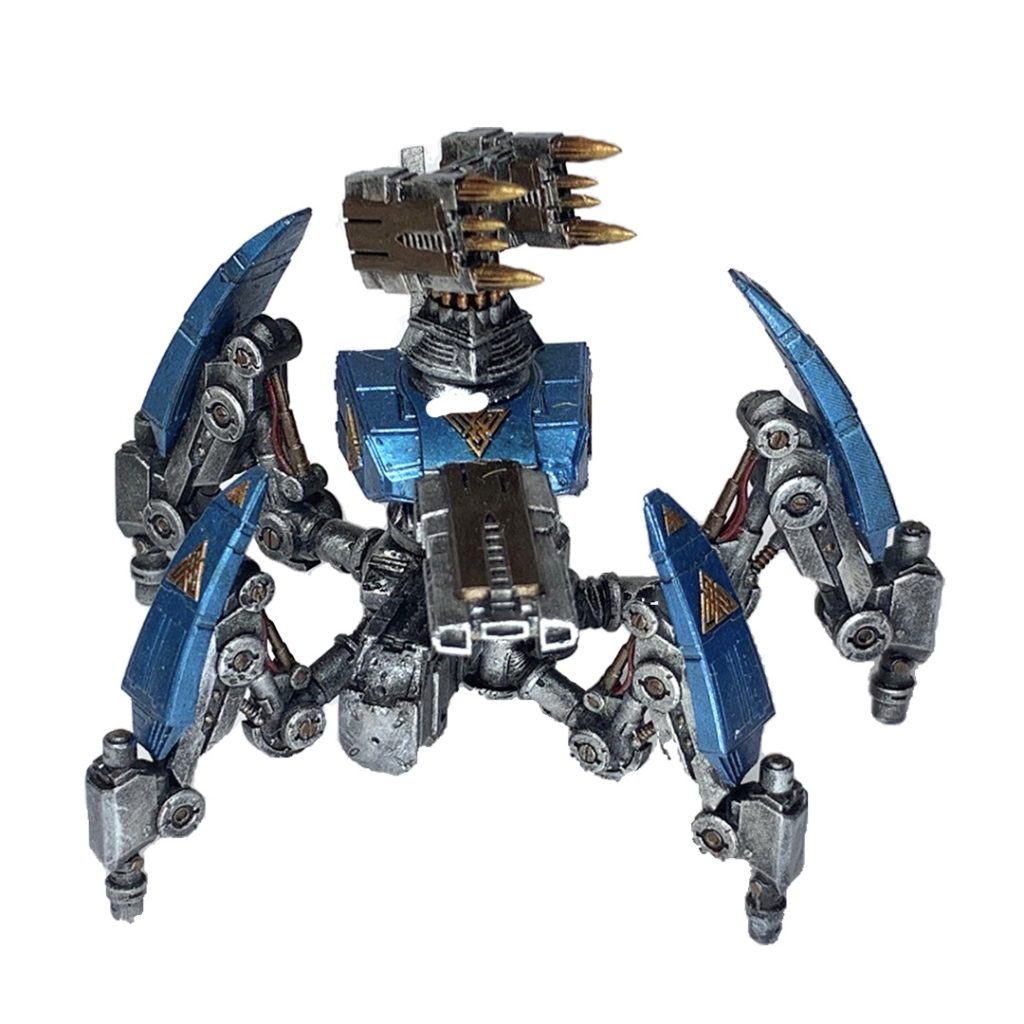 Highly intelligent Arachnid’s that evolved over eons beyond measure. Billions of years of war, internal conflict ,and disease finally resulted in the terminal decay of their physical bodies and prompted the Araneae to upload their brains to machines created in their own image to attain digital immortality.

As digital entities they possess the ability to instantly transfer their intellectual essence from one robotic body to another. Because they cannot be killed they are without fear on the battlefield.

Yet they possess an age old longing for the physical warm body that they are now denied , spurring a hatred of all flesh and blood species. As robots they can survive any atmosphere, or harsh environment. 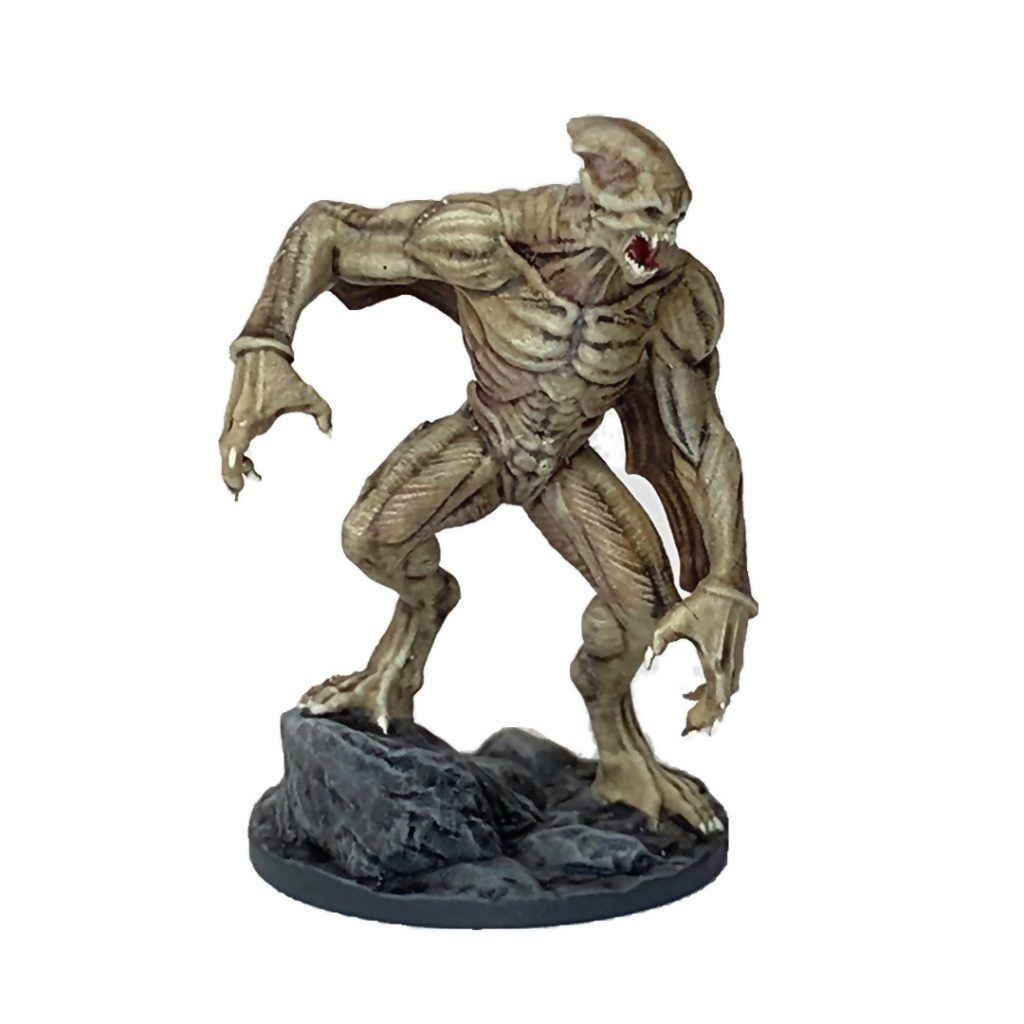 Inhabitants of a seemingly lifeless planet in the near Earth galaxy of only 9 million light years distance the Modus Sanguinarions are the scourge of the planets that are the home of any creature of warm flesh and blood. They are by any medical definition “living dead”. They feed on blood. They are almost indestructible and have the ability to disappear and regenerate at will, which provides the ability to ambush their victims by stealth.

For a billion years they have been absorbing all living creatures that inhabit the few thousand planets in the Maffei galaxy that can support life as we know it. Inhabitants of neighbouring galaxies now rightfully fear the spread of this dreadful alien scourge as they have consumed to the point of extinction the available food supply. The Modus Sanguinarions have recently mastered superluminal travel and no one in the universe is now safe.

The Machimo Agama is an ancient reptilian race of aggressive predators that inhabit the distant galaxy of Cosmos Redshift 7. One of the oldest, most distant, from Earth.

These armoured reptilians are primitive, yet highly intelligent, killing machines that hunt in packs. Virtually indestructible to light arms fire their acid blood provides a last line of defence that discourages all but the most determined opponent. They are extremely stealthy due to their ability to change their skin tone and colour to blend in with their surroundings. The colourful foliage on their home planet often results in the creatures displaying a vibrant mix of colours that change instantaneously as they move at great speed across a ever changing background. This enables them to get with striking range of their prey to attack with venom, teeth and talons. 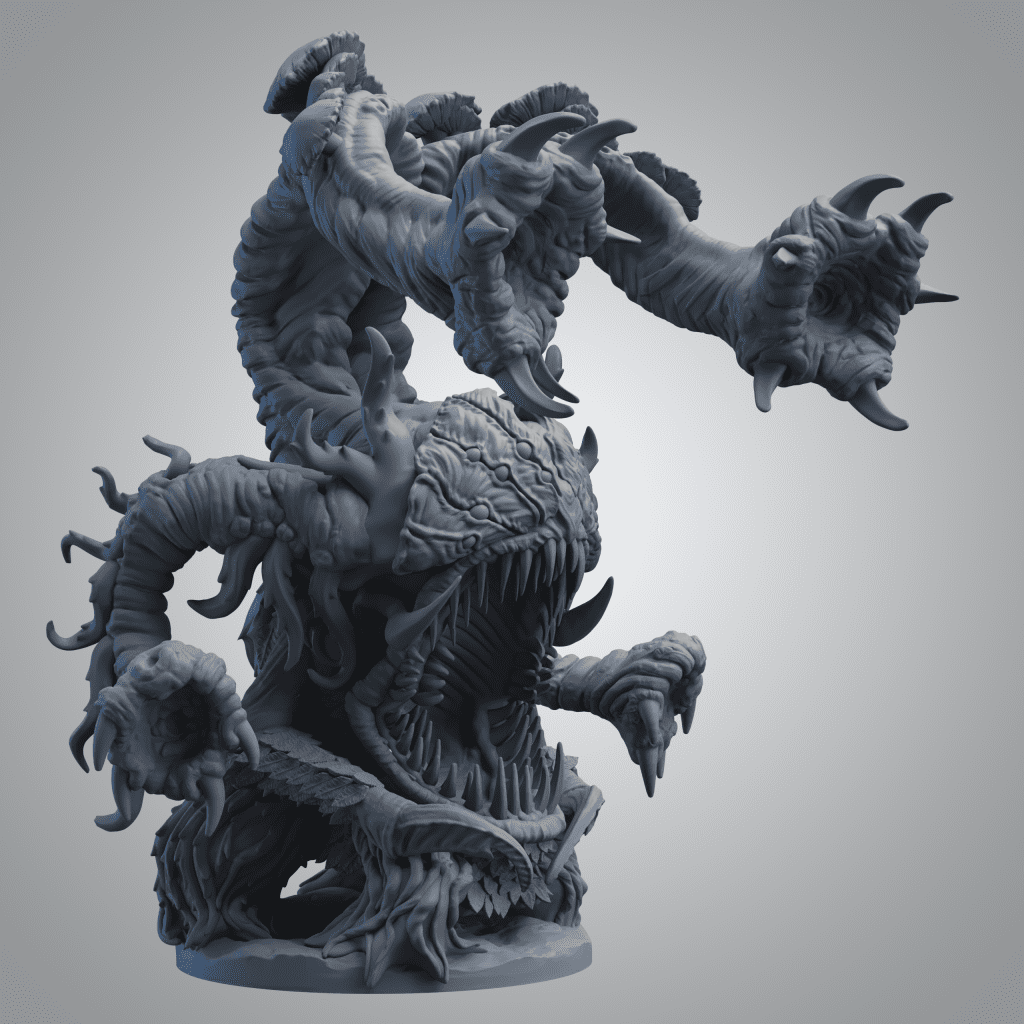 Ubiquitous inhabitants across a thousand planets in the Centaurus A galaxy. This is a species of carnivorous plants that are ferocious predators capable of the fast pursuit of their prey. They absorb their victims in the manner of a Venus Flytrap.

They have not mastered space travel, but spread throughout the universe by depositing seeds in some visiting alien victims who then act as involuntary carriers infecting their home planets with this deadly menace. Their speed of reproduction and voracious appetites result in their early dominance of any planet on which they get a foothold. They have regenerative powers and can quickly replace severed limbs.

They can only be completely destroyed by fire. Blasters only distribute their seeds, which quickly grow into a multitude of deadly adults. 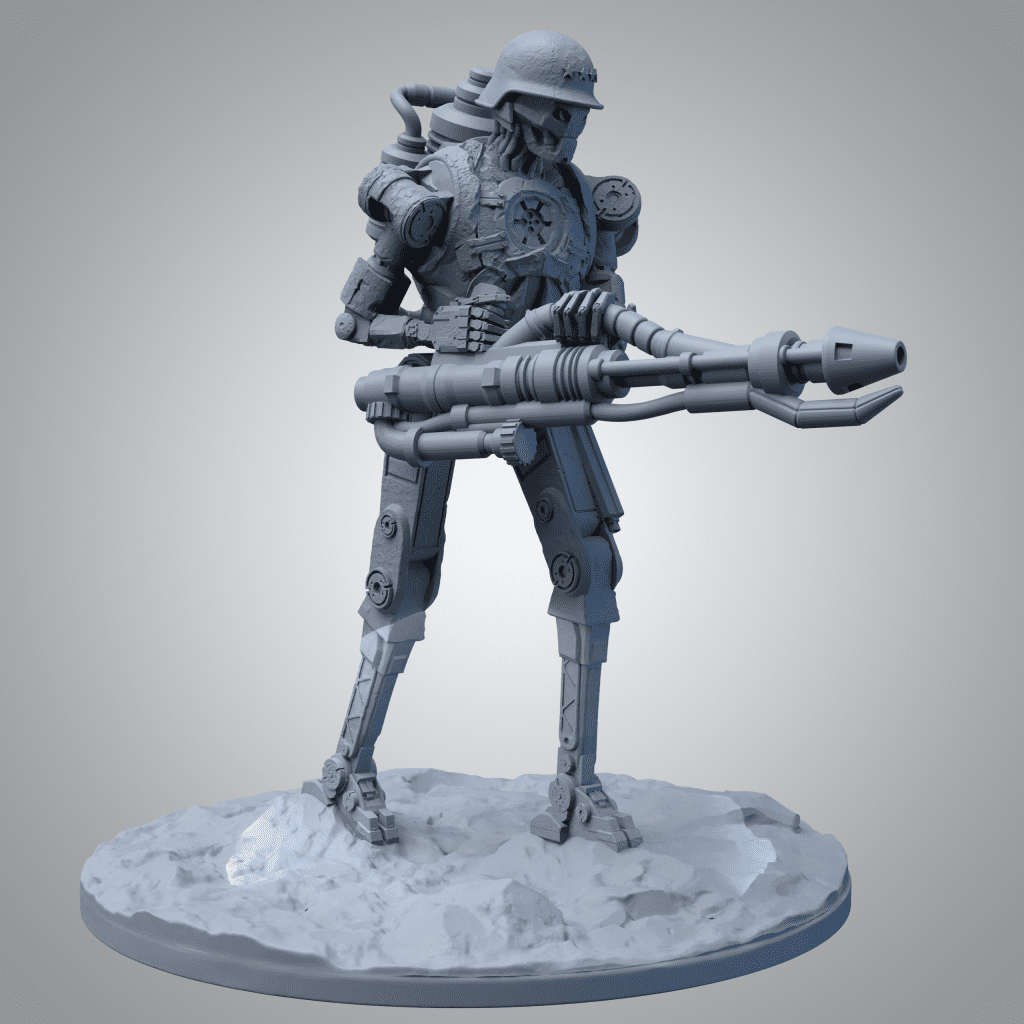 These robots were built to serve an ancient race of humanoid aliens in the Canis Major Dwarf Galaxy. A thousand years ago the last of their humanoid masters died, but the robots continue to serve as best they can due to a glitch in their programming. Meals are still served and sometimes the skeletal remains of the masters are still spoon fed. The robots were built to fulfil all servile roles in the society. There are fighting droids armed with lasers and an array of other lethal weaponry, mechanics, engineers, domestics, medics etc. Spares are scarce and the ability to re-manufacture parts and repair failing machinery even scarcer.

The robots have been infected with a computer virus. By human standards they could be certified insane. They hallucinate, misinterpret and misjudge situations. The soldier bots will attack anything they perceive as not of their world. The problem is they may travel to other worlds and believe they are still on their home planet. They will then seek to defend against invasion, even though they are the invaders. They are strong fighters, albeit diminished by age and wear. They will fight to destruction. Such is their insanity that some even partially cloth themselves in the remnants of their master’s clothing, as if the dividing line between them and their master is smudged. Such is their desire to continue serving a dead master they live in a confused dual state where the role of master and servant is combined. 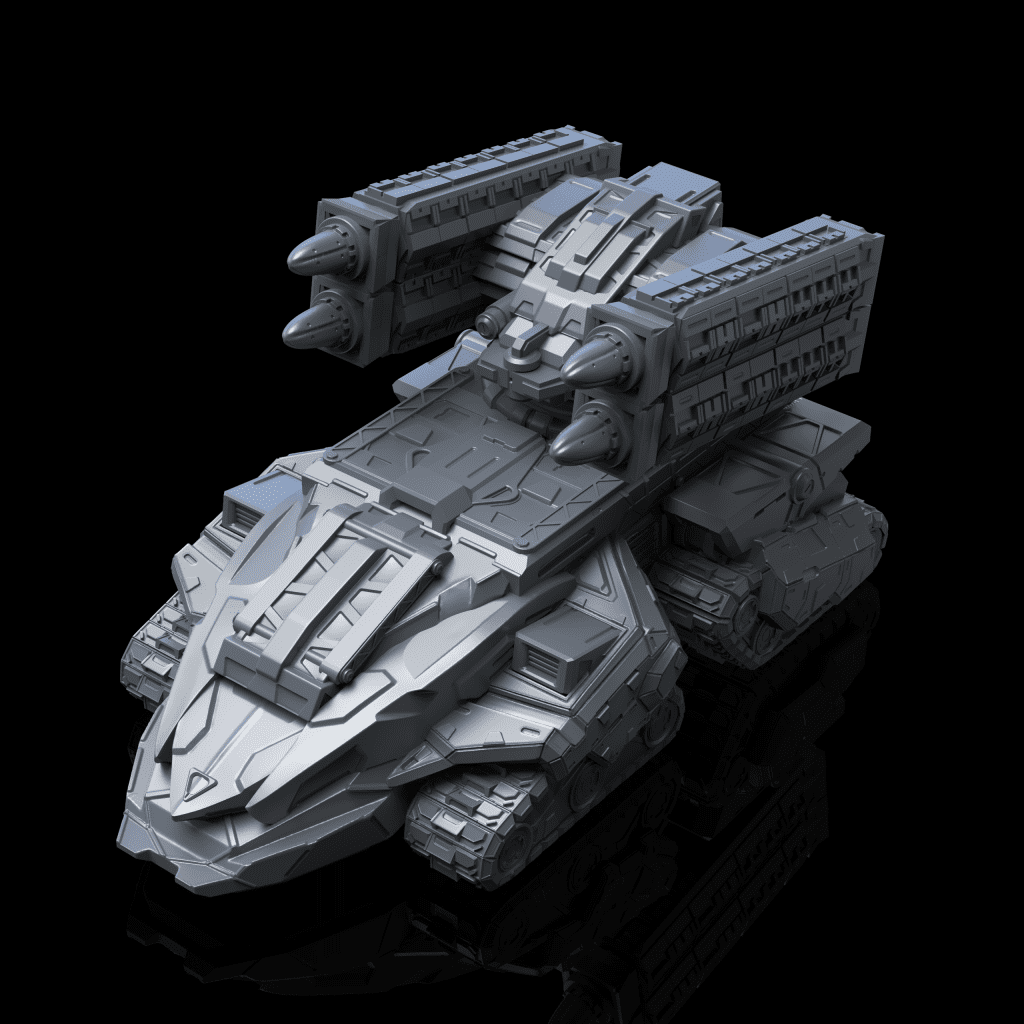 The Earth Federation has developed a number of sophisticated AFV’s to spearhead and support their Space Marines in battle.

Key to battlefield control is the Dreadnought Heavy Command tank. This a variant of the standard Dreadnought heavy tank with an added armoured cupola for the General Officer to view the battlefield and direct his troops.

To make best use of scarce manufacturing facilities the Earth Federation uses the same chassis as the Dreadnought tank for a long range Multi-Launch Rocket System.

The tanks are heavily armoured with a large calibre long range cannon as its main weapon. This is supplemented by a number of close range defence weapons to fight off infantry attacks.

Play on the intelligent wargames table

Page load link
We use cookies on our website to give you the most relevant experience by remembering your preferences and repeat visits. By clicking “Accept All”, you consent to the use of ALL the cookies. However, you may visit "Cookie Settings" to provide a controlled consent.
Cookie SettingsAccept All
Manage consent

This website uses cookies to improve your experience while you navigate through the website. Out of these, the cookies that are categorized as necessary are stored on your browser as they are essential for the working of basic functionalities of the website. We also use third-party cookies that help us analyze and understand how you use this website. These cookies will be stored in your browser only with your consent. You also have the option to opt-out of these cookies. But opting out of some of these cookies may affect your browsing experience.
Necessary Always Enabled
Necessary cookies are absolutely essential for the website to function properly. These cookies ensure basic functionalities and security features of the website, anonymously.
Functional
Functional cookies help to perform certain functionalities like sharing the content of the website on social media platforms, collect feedbacks, and other third-party features.
Performance
Performance cookies are used to understand and analyze the key performance indexes of the website which helps in delivering a better user experience for the visitors.
Analytics
Analytical cookies are used to understand how visitors interact with the website. These cookies help provide information on metrics the number of visitors, bounce rate, traffic source, etc.
Advertisement
Advertisement cookies are used to provide visitors with relevant ads and marketing campaigns. These cookies track visitors across websites and collect information to provide customized ads.
Others
Other uncategorized cookies are those that are being analyzed and have not been classified into a category as yet.
SAVE & ACCEPT
Go to Top